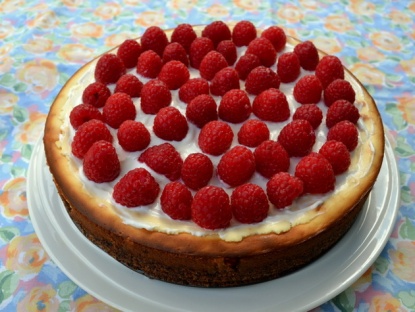 How’s that for a mouthful! Our local Arts Council hosts a yearly variety show to raise funds for the Peter Oliver Scholarship. This scholarship, named for a man who was famous for mentoring young actors in our small town, helps young people embarking on studies in the arts. This year I am one of the organizers. We serve a variety of cakes, sweet squares and cookies during the intermission. People, in our community, flock to the United Church basement to enjoy the entertainment and to savour the half-time treats. Today I baked a low carb, gluten-free, sugar-free cheesecake for the event.

For those of you who can’t eat sugar and are trying to be gluten-free this easy to make cheesecake just might fit the bill when you get a craving for something sweet. The crust, made with a mixture of ground almonds and ground pecans adds rich flavour and the creamy smooth texture of the cheesecake filling won’t disappoint!

You may be wondering why I have used a number of different sugar substitutes in this recipe. I have found that the end result is simply better when doing so. Each sugar substitute has a slightly different flavour. The stevia can sometimes have a bitter after-taste, the xylitol feels almost cool as it dissolves in the mouth and the sucralose can be almost overwhelmingly sweet on it’s own. I’ve discovered that when I mix them altogether in one recipe the end result is simply better flavour!

The cake can be covered with plastic wrap right inside the cake pan and stored in the refrigerator until you are ready to serve it. Run a breadknife carefully around the outside edge to loosen the cake before releasing the spring.